Based in Los Angeles, this rising duo was formed when singer and songwriter Trevor Dering met producer Valentin Fritz while they attended the Berklee School of Music in Boston. With a genre-bending blend of R&B and soul with pop and house, they created an unique sound. Influenced by artists such as John Mayer, Phoebe Bridgers and Calvin Harris, they released their debut single “Indigo” in 2018. 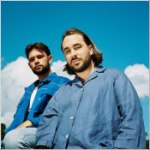 By fusing the best elements of classic R&B, a modern beat and a breezy West-Coast vibe, their new single is smooth and soulful. Taken from their album “I Loved You, What Happened?”, they enrich the emotive and vulnerable lyrics with their unique sonic brew. And with the addition of some leisurely horns and Trevor’s velveteen vocal tone stroking your ears, this enticing bop is an exceptional jam.